I was asked to make the main course at a family gathering for 10.

I decided it had to be a bit of a show stopper - but without insane effort - after all this was a gathering and I did not want to be isolated in the kitchen.

Beef Wellington is not a recipe to rush however and I would set aside a good 3-4 hours to do the dish justice.

The bulk of the effort is making the Duxelle filling. Once made, it is just the case of rolling up the fillet of beef and cooking it in the oven. Traditionally, Beef Wellington has crepes between the pastry and the meat. However, I find this makes the dish stodgy and instead prefer to use a layer of fresh spinach leaves.

Cooking for 10, I was privileged to be given a whole fillet of beef. I was planning on cooking the whole fillet as one - but realised quickly that it would not fit in the oven!

I have to say I was nervous that I would over cook the beef and ruin it. However, I should not have feared - my trusty meat thermometer came to the rescue and enabled me to get the meat perfect.

I strongly advise that you use a thermometer as you cannot touch the beef to determine if it is done. 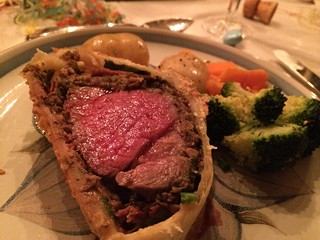 This dish is a firm family favourite - both with the chef and the diners!

It is both quick to make and tastes delicious.

It has all the classic Thai attributes, fragrant, sweet, spicy and salty.

The Thai basil provides the perfect back drop with its delicious aniseed flavour.

This recipe would work equally well with chicken.

I like to serve mine garnished with Spicy hot peanuts. (This is less traditional, as the Thai’s generally do not cook with peanuts anymore, due to them being difficult to keep in a hot environment, and linked to disease coming from a fungus).

Otherwise this would traditionally be served with a fried egg placed on top, similar to Nasi Goreng. 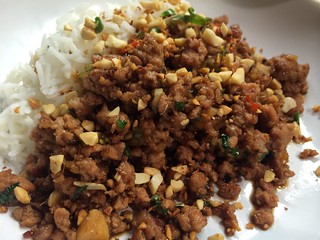 Naga Chilli Chicken : Not for the faint hearted

I was challenged to come up with a seriously chilli hot recipe for the Dropzone.

Being a chilli-head, this was not something to be shied away from!

A quick peek on the internet and I got myself a bag of Naga Ghost Chillies. These chillies should come with a health and safety warning as they are off the scale in terms of heat. (1.4 million Scoville, where as a scotch bonnet is 400,000 Scoville).

Believe it or not, I thought I would add some herbs and seasoning to make the kebabs as delicious and tasty as possible.

Frankly, after the first 3 seconds, which I have to say were flavoursome and fruity, the rest became a blur. The heat was mind numbing causing waterfalls of sweat to explode from every part of my body.

I did finish a kebab, but I really would not recommend this recipe, at this chilli heat.

I will make it again, but will use 1/3 of a naga chilli. I will post back with the more palatable results! 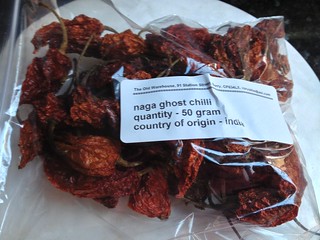 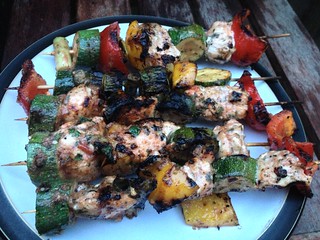