I was watching Masterchef last week and they were making stuffed ravioli for the quarter final. It reminded me of this dish I made for a future boss and his wife a couple of years ago. The beauty of the dish is that it can all be made in advance at your convenience. Cook the ravioli when ready to serve, and warm the bisque through - not hard .

Being a Bank Holiday weekend and what with the weather being cold and not inviting to jump, I had extra time to play in the kitchen. This is not a particularly difficult dish to make, although it is made significantly easier by having a pasta machine and a ravioli cutter. The stuffing has a fantastic fresh flavour from the crab and tarragon. You will need a pasta cutter, but a rolling pin will suffice for the pasta.

The spicy prawn bisque is amazing, a wonderful voyage of flavours. The prawn bisque with the brandy adds depth and the star anise wows the tastebuds. When you bite into the ravioli, a wonderful sea fresh taste is received followed by the aniseed.

Only homemade pasta will do for this dish. It cooks in under 2 minutes, keeping the scallop slices tender and delicious. 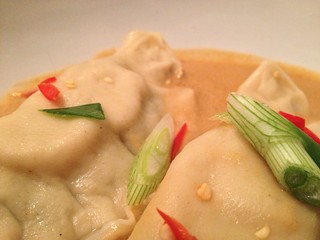 I have never tasted, let alone tried to make pulled pork before!

Whether this has an authentic taste, I really cannot say! What I can say is that it tastes darn good! :-p I basically looked across the net for inspiration and then developed my own recipe. Almost all the recipes I looked at were based on Dr Pepper or a Cola base - so I followed suit

The dry rub seems to be one of those family secret affairs - where people only allude to a couple of the flavours.

Almost every recipe also called for shop bought BBQ sauce to be added to the pulled pork for the last hour of cooking. Personally, I could not see the point of going to the effort of developing all this flavour and then masking it - so this step was omitted.

The final results were delicious. The pork has a fantastic depth of flavour, is moist, tender and out of this world delicious. Considering this was neither slow cooked nor seen a BBQ, the outer bark of the pork was fantastically crispy, tangy and extremely tasty.

As a first attempt, as you can tell, I am very pleased. Roll on the BBQ season. 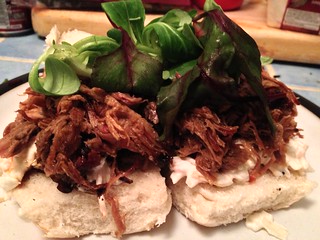 If there is one dish that reminds me of my travels abroad and love of discovering new food, then this is the dish.

I think it is the fusion of traditional French cooking coupled with the balanced use of Vietnamese spices, citrus and herbs that I adore so much.

Traditionally, this would be made using beef bones - but I could not get any from the butchers on the day I wanted to make this. Fortunately, I had a batch of roast chicken bone stock in the freezer and so went with this. (Left over carcass from a roast chicken, halved and simmered with onion, star anise, thyme, peppercorns for 4 hours). As it happened, I think it was probably for the best, as the pulled pork and tiger prawns would have been over shadowed with a heavier base.

The depth of flavour, clarity of the broth and amazing roller coaster ride of hot, sweet, salty and sour that hits yours tastebuds made this an instant hit in the CookBakeSmile household.

Give it a go, and substitute the pulled pork with fish, more prawns, poached chicken / pork in the broth, if you do not have the time or inclination to spend so long in the kitchen. The Pho broth is very easy to make in its own right. 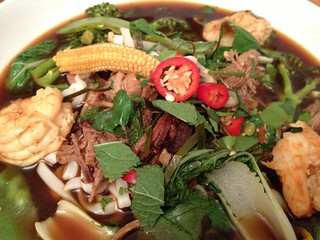